Life is Kind to me

Death of a Hussy (Hamish Macbeth Mysteries, No. 5)

It's really enjoyable to read the adventures of Macbeth full of not only flaws but also charms. It's the first book as a McBeth series and I am so curious of the relationship with Priscilla onwards....so I tried every means to get the earliest volumes in this series, but failed. Let be informed if somebody get a good news. I recommend M.C. Beaton's another series of Agatha Raisin... 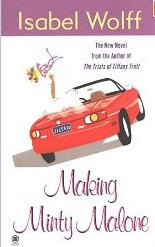 Unlike Bridget Jones obsessed by her diet and man, Minty Malone shows her life is more than that: relationship with the person around her, success in her career etc.. I might be one of many girls who keep being nice to the others, and feel good when she yelled 'No, i'm busy'. And I empathized with her when she had her hair cut.

It's very hilarious and delightful.