So thilling book named Harry Potter And The Prisoner Of Azkaban 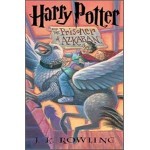 [외서] Harry Potter and the Prisoner of Azkaban : Book 3

I was read all 8 book include Harry Potter and the Cursed Child in korean, but this book have the most thrilling part.. The thrilling part that I choose is when the Black go out the prison and when he meet  Harry. I think Black will kill or do some dark magic for him, but he was a godfather of harry. And when Lupin became a  werewolf,  Black was fight with him.But  when Harry and Black was surrounding by dementors some person come and saved them.Harry was think the person saved them is his father, but it was Harry. I was so surprising for that part..It's because he use time turner and saved them. In conclusion, I would recommend this book for many peoplle.